Jellyfish, also known as jellies, are beautiful and fascinating creatures, but they can also be dangerous. And they may be on their way to taking over the ocean. 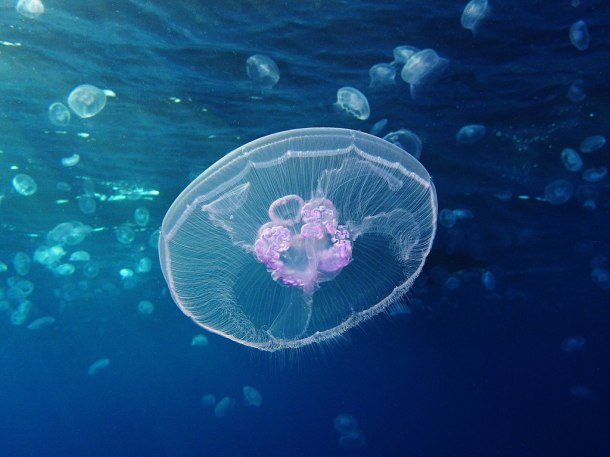 A bloom of moon jellyfish (Aurelia aurita) in the Red Sea, Egypt. Photo by Alexander Vasenin.

Jellies are extremely simple animals. Their bodies are over 95% water. They don’t have brains, bones, or blood, yet they can swim and react to their environment. Some even actively hunt their prey.

Their simplicity makes them versatile. Unlike most animals, they can survive in almost any conditions—extremes in temperature, salinity, acidity, and oxygen hardly seem to bother them. This puts them in a unique position to benefit from the rapid changes our ocean is undergoing. 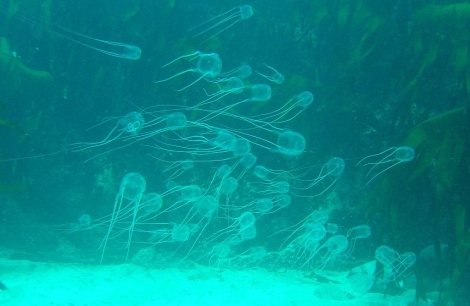 Box jellyfish, some of the most venomous animals in the world, swim in the waters off Cape Town. Photo by Peter Southwood.

Overfishing, for example, has depleted populations of the turtles, birds, mammals, and fish that feed on jellyfish, removing the natural predators that would normally keep jelly populations in balance. Rising ocean temperatures speed up the metabolism of jellies so that they eat more and reproduce faster. Pollution from agriculture feeds increasingly large oxygen-starved “dead zones” where most marine life can’t survive—but jellies thrive. Since jellyfish feed on the larvae of fish and other animals, they prevent other species from re-colonizing the area even if oxygen levels recover. 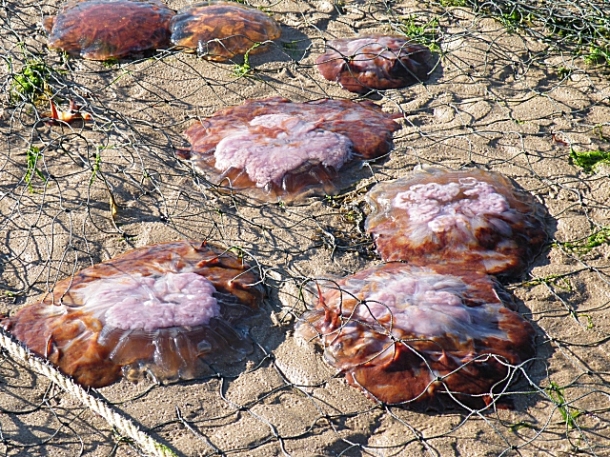 The link between jellyfish and climate is not robust due to a lack of evidence. We’ve never had much of a reason to worry about jellies until now. But we know that we are continuing to push the ocean toward conditions that threaten entire ecosystems while remaining hospitable to ever-adaptable jellyfish.

We can look to Japan to see the havoc wreaked by jellies. Blooms of Nomura’s jellyfish that used to occur every few decades now invade almost annually, perhaps due to increased agricultural runoff from neighboring China. These jellies, which can weigh up to 440 pounds, tear fishing nets, kill fish, injure fishers, and can even capsize boats. Jellies have also been clogging up power plants around the world. 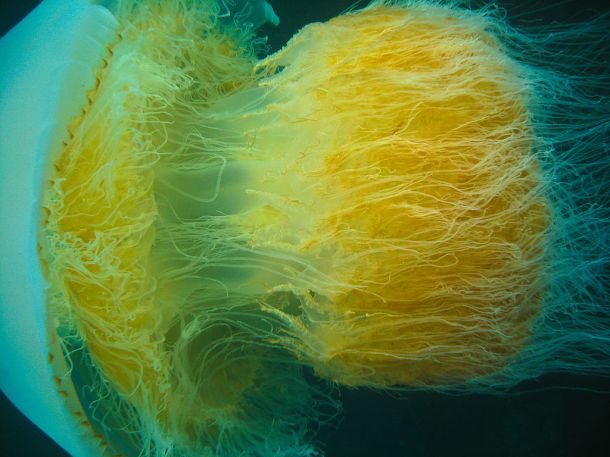 So what can we do to stop the impending jellyfish invasion? The answer, simply put, is to keep doing the same things we should all be doing to slow climate change and ocean pollution. Do the best you can to reduce your carbon footprint. Eat less meat to prevent polluting coastal waters. Cut back on seafood or eat only verified sustainable seafood so your fish doesn’t come with a side of sea turtle bycatch.

The ocean will continue to exist no matter what we do to it. But whether it sustains a beautiful diversity of life or a mass of gelatinous predators is a choice we must make, and soon.